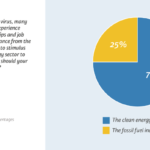 The Coronavirus Should Signal The End Of Fossil Fuels

The global pandemic known as COVID-19 and the fossil fuel industry have nothing in common. Or do they? Two new surveys by conducted in April by Yale Climate Change Connection and the the Center For Climate Change Communication at George Mason University show some surprising insights into what American voters are thinking these days.

The results can be summarized as follows:

The notes that concerns about climate change declined during the so-called Great Recession of 2008, but there has been no similar drop-off today. Two-thirds of respondents said global warming was either extremely, very, or somewhat important to them personally, and more than 40% said they would be personally harmed by the effects of a warming planet. Nearly half said global warming would affect people in their community, and a majority said they were at least moderately interested in news stories about climate issues, including actions by government.

Anthony Leiserowitz, director of the Yale Program on Climate Change Communication, tells the Times, “climate change has matured as an issue” and become “a durable worry” in the minds of millions of Americans. Edward Maibach, director of the Center for Climate Change Communication at George Mason University, says people in the US “accepted the reality of climate change but saw it as a distant problem” until recently. But this latest survey shows “the majority of Americans see climate change as a clear and present threat to the health of people in their community. It’s a threat that’s come home.”

Sunshine Menezes, an associate professor of environmental communication at the University of Rhode Island, tells the Times, “Taken together, the report’s findings indicate that Americans are reaching, or maybe even have reached, a turning point. They see climate change in their backyards, they recognize the unequal impacts, they increasingly recognize the urgency of adaptation measures, and they want news coverage that tackles consequences and solutions.”

Support For Renewable Energy Is Strong

The first survey shows the coronavirus has not pushed climate change into the background, as many expected. A second survey by the Yale and George Mason researchers finds overwhelming support for using federal funds to support clean energy instead of fossil fuel interests. Oddly, the response by the federal government has been exactly the opposite, with billions promised to bail out oil and gas companies but almost no relief for renewable energy companies despite the fact that job losses in the clean energy sector have been staggering.

When Life Gives You Lemons…

Life is passing out a passel of lemons these days and the global economy has ground to a virtual halt due to the coronavirus. There are two paths forward. One calls for spending whatever it takes to return the world to the same condition it was in 6 months ago. The other uses the pandemic as a “tipping point” moment to accomplish in months what otherwise would have taken years if not decades — a massive departure from a model that makes energy from burning fossil fuels the basis of the world economy and a transition to a clean energy model that creates millions of new jobs while slashing carbon emissions permanently.

The Religious Community Weighs In

This week, 42 religious institutions in 14 nations announced that they are selling the fossil fuel stocks in their investment portfolios. 350.org calls it the single largest divestment action in history. Father Endra Wijayanta, director of the Justice, Peace, and Integrity of Creation Commission for the Archdiocese of Semarang in Indonesia, tells 350.org, “In this COVID-19 pandemic, it is the exact time not only to reflect, but to act. We have to stop our ecological spiral of death. We have to revive our ecological hope, in massive repentance of humankind, by taking the pathway to more sustainable living.”

Dr Rowan Williams, the former Archbishop of Canterbury, adds “The current health crisis has highlighted as never before the need for coherent international action in the face of global threat. Can we learn the lesson and apply it to the global threat of climate change? To do so means taking practical and effective steps to reduce our lethal dependence on fossil fuels.”

Mark Campanale, founder of Carbon Tracker, an independent think tank that analyzes the financial impact of an energy transition, has his own take. “A comprehensive economic recovery means taking the long view, investing now in infrastructure that will serve communities for years to come. Fossil fuels do not have a place in the long-term health of humanity. Faith institutions’ commitment to create a better world is leadership that governments should follow.”

There’s Bad, & Then There Is Worse

The coronavirus has been bad for the global economy, but it is simply a harbinger of the pain that climate change will bring with it. Today, millions of lives are being disrupted. In the future, billions of humans will be impacted by a dangerously warming planet.

The one bit of good news in all this is that people are finding new reasons to trust scientists rather than political leaders when it comes to addressing social and economic issues. The fossil fuel industry has been spending billions for decades to destroy people’s belief in science, making all those white coated lab types seem like agents of the Deep State. The horrific response to the virus by the White House, which one day says it is up to the states to figure out how to respond to the crises then the next day says it has the power to order houses of worship to reopen (it does not), has exposed the lie at the heart of the conservative movement.

It’s long past time for Americans to ignore the fusillade of bombast coming from Pennsylvania Avenue and demand real progress toward a low carbon future that will protect us and our heirs from a human caused calamity. If that means a rejection of the more despicable tenets of capitalism — that greed is good and more greed is better — so be it. As America’s second-worst president so famously said, “Bring it on!”

Steve Hanley Steve writes about the interface between technology and sustainability from his homes in Florida and Connecticut or anywhere else the Singularity may lead him. You can follow him on Twitter but not on any social media platforms run by evil overlords like Facebook.